Former Vice President Mike Pence revealed the title of his upcoming memoir this week – but Jimmy Fallon and his “Tonight Show” crew have some thoughts at what the other options were.

Pence’s book, set to come out in November, is called “So Help Me God” and makes him just the latest Trump lackey to come out with a book following his time in the administration. Like we said, though, Fallon was pretty confident there were other titles in the running. In fact, he teased the audience during his monologue with the idea that his show had obtained a list of other possibilities.

But as Fallon was about to start the bit, Tariq Trotter jumped in to give him a hard time, mocking the predictability of it. 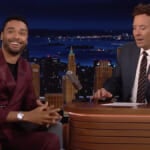 “Oh here we go,” Trotter bemoaned. “Let me guess, you’re gonna list a bunch of fake Mike Pence memoir titles. Mhm, mhm, and then a little graphic is going to pop up for each one, so that the audience can read the title and then ‘laugh’ about it.”

When Fallon confirmed that that was exactly what was about to happen, Trotter groaned that he knew “exactly how this is going to go down” – and subsequently took over the bit for Fallon.

First, Trotter went for the obvious puns on existing book titles. That included “A Pale of Two Cities” and “Lord of the Flies on the Head.” Trotter also went for a beloved children’s book, turning “Are You There God? It’s Me, Margaret” into “Are You There Mother? It’s Me, Your Husband.”

Of course, a few song titles made the mix as well. At one point, Trotter suggested something like “Little Trumper Boy,” in place of “Little Drummer Boy.” In the end, Trotter knew Fallon would go for something “controversial” and salacious – something like “50 Shades of Beige.”

When Fallon confirmed all those titles and informed Trotter that he nailed it, the “Roots” member deadpanned: “Cool, ’cause it’s a fun bit. You should do it!”

You can watch the segment in Fallon’s monologue in the video above. 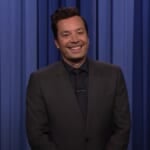 ‘Peaky Blinders’ Film Spinoff to Begin Production in the Next 18 Months, Screenwriter Says