A few days ago, The news that a 22-year-old girl in Hangzhou stayed up late for four or five consecutive days to work overtime and was admitted to the ICU for emergency treatment caused attention. It is understood that the girl has not been working for a long time, doing network operations in an Internet company. On July 27, the Jimu News reporter learned from the family of the girl involved that the girl had unfortunately passed away on July 26.

The girl’s father also left a message on social platforms saying : “My child will finally leave us two lonely old people on July 26, 2022. Thank you for your help during this time. I hope that all the children and all kind people must take care of their bodies and work hard. Take care of yourself! Thank you everyone.”

The girl’s niece said that the girl’s brother ten years ago Died in a car accident, she took on the debt of the family alone and worked hard for it. The girl’s cousin said that she had been staying up late to work overtime. Before the incident, she also developed symptoms of cold and chest tightness. She was urged by her father and the company to decide to take a leave of absence to see a doctor and rest at home. 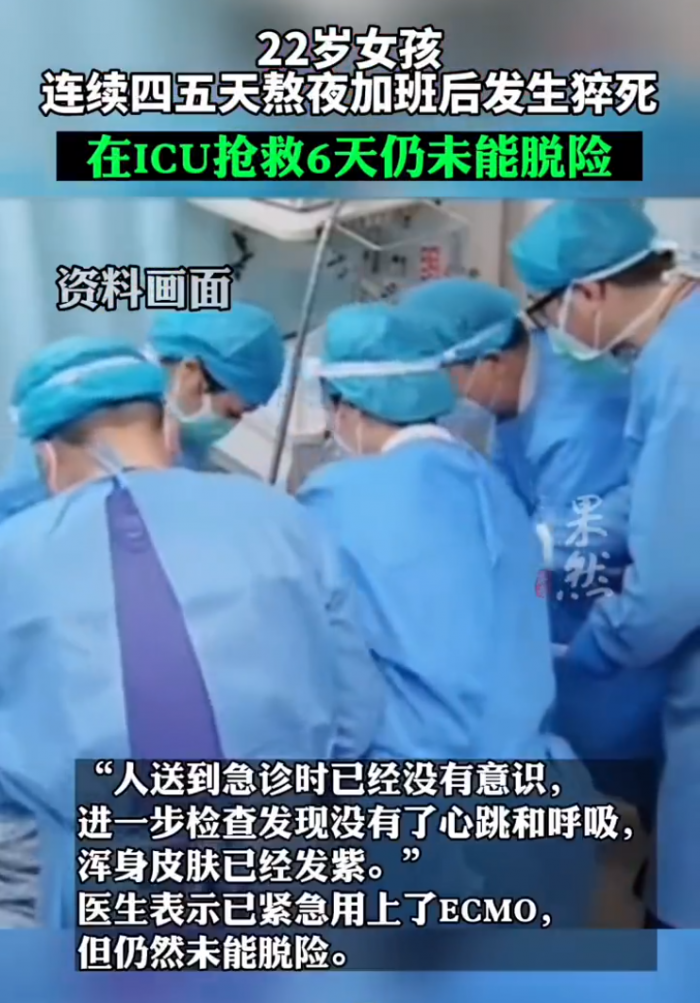 When the girl was sent to the hospital for emergency treatment, because her parents had difficulty paying for medical expenses, the company paid her 100,000 yuan in the form of IOUs, and no longer helped her after raising tens of thousands of yuan. Regarding the follow-up treatment related to the girl, the company executive said that there is nothing to say, and if there is anything, you can contact the company’s legal affairs.

Previously, there were media reports that the girl stayed up late and worked overtime until four or five in the morning for 4 or 5 consecutive days. At this point, sudden death occurred, and the hospital diagnosis may be “sudden death caused by myocarditis”. After 6 days of rescue in the ICU, he was still in danger of life.

It is reported that the girl Xiao Song works as a network operator in an Internet company. She works very hard. She caught a cold more than a week ago but didn’t care too much.

As early as the beginning of 2020, Dr. Lilac released the “2020 National Health Insights Report”. According to the data in the report, about 53% of people had worried that they would die suddenly, Among the young post-95s and post-00s, 7% and 9% even worry about their sudden death every day.

995 and 996 companies are everywhere, and few Internet companies do not work overtime. Excessive overtime, physical ruin, mental depression, high-intensity work pressure, and overuse of the brain all accelerate the exhaustion of their lives.

The sudden death of young people has the following situations:

First: staying up late for a long time can lead to disturbance of the biological clock, over-excited sympathetic nerves, which can easily lead to sudden cardiac death and induce heart disease factors of the attack. For people with underlying diseases, staying up late may become the cause of sudden death. 90% of the sudden deaths of young people are related to staying up late!

Second: long-term pressure, living in the city, high house, even high rent, pressure of marriage, children’s education, parents’ expectations, Material desires are rich. On the other hand, the oppressive task of work is aggravating, and the pressure is overwhelming.

Third: Overworked, 996 working overtime, poor physical condition, such as a cold and fever. Thinking that he was young, he kept on delaying, causing explosive myocarditis.

Fourth: Wine culture, social drinking is also one of the incentives. Heavy drinking can indeed lead to serious damage to the heart muscle, which may lead to alcoholic cardiomyopathy, and in the most serious cases, may increase the risk of sudden death.

Sixth: Emotional agitation, too much emotion will cause the patient’s blood pressure to rise, coronary artery constriction, and serious complications caused by the patient’s sudden death.

In this regard, the doctor also expressed the hope that everyone should try to ensure adequate sleep when they are busy. At the same time, they should also check their physical habits from time to time. Comfortable place, be sure to go to the hospital in time.