Despite a visit “in peace in the region”, the landing of Nancy Pelosi in Taiwan has triggered the anger of Beijing, which announces “targeted military actions”. 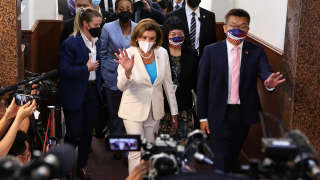 Speaker of the United States House of Representatives Nancy Pelosi after speaking with Deputy Speaker of the Taiwanese Parliament Tsai Chi-chang.

INTERNATIONAL – The situation is not calming down. A few hours after Nancy Pelosi set foot on the island of Taiwan on Tuesday evening, the declarations of the speaker of the American House of Representatives did nothing to change the anger of Beijing.

In response, China announced a series of live ammunition military exercises around the island. Supported by Russia and North Korea, the country led by Xi Jinping continues to consider the presence of this high American figure on Taiwanese soil as an affront to his regime.

This Wednesday, August 3, the Chinese Minister of Foreign Affairs, Wang Yi, also warned that “ those who offend China must be punished, inevitably.” “It’s a prank, pure and simple. Under cover of ‘democracy’, the United States is violating China’s sovereignty ”, also said the Minister, on the sidelines of a meeting of ASEAN (Association of Southeast Asian Nations).

The HuffPost takes stock of the situation in Taiwan and in this area of ​​the Asian continent the day after the arrival of Nancy Pelosi.

After her controversial arrival aboard an American military plane, the President of the US House of Representatives said on Wednesday that it had come “in peace to the region”. During a meeting organized with the vice-president of the Taiwanese Parliament Tsai Chi-chang, Nancy Pelosi added: “We come as friends to Taiwan”.

“Today, our delegation […] came to Taiwan to say unequivocally that we do not ‘will not give up our commitment to Taiwan and that we are proud of our enduring friendship’ , the Democrat 82-year-old American at an event with the island’s president, Tsai Ing-wen.

Our visit reiterates that America stands with Taiwan: a robust, vibrant democracy and our important partner in the… https://t.co/g1O05rzkmW

Nancy Pelosi s is already noted on the international scene for his surprise visits and often symbolic, as in Ukraine three months ago, practically to the day.

Tsai Ing-wen, from a pro-independence party and at the head of Taiwan since 2016 hammered that his country will not “back down” in the face of the threat of arms, when Beijing announced a series of military exercises judged

While Nancy Pelosi is also expected in Japan in As part of its diplomatic tour in Asia, the situation caused by the latter makes Tokyo “concerned”, especially since some of the “targeted military actions” promised by Beijing will take place inside the exclusive economic zone (EEZ) Japan.

“The maritime zone announced by the China for military exercises to be conducted from August 4 at noon (03:00 GMT) includes Japan’s EEZ” , noted Japanese government spokesman Hirokazu Matsuno. Tokyo “expressed concern to China, given the nature of military activities”, which include “the firing of live ammunition” , he added.

“Peace and stability in the Taiwan Strait are important not only for the security of our country, but also for international stability ”, judged Hirokazu Matsuno. ” Japan’s consistent position has always been that it expects Taiwan issues to be resolved peacefully, through dialog “.

Interrogates on a possible support from Tokyo for the visit of Nancy Pelosi, the spokesperson for the Japanese executive replied that the Japanese government was not

“not able to comment on President Pelosi’s international visits”.

At the same time, South Korea, which is also to welcome the speaker of the American House of Representatives on Wednesday, called for dialogue to maintain peace and stability in the region. “Our government’s position is to maintain close communication with the parties concerned […] considering the importance of peace and stability in the region through dialogue and cooperation” , an official said from the presidential office to the press.

See also on The HuffPost: Nancy Pelosi arrived in Taiwan despite warnings from China

F1: Alpine thought it had found a new driver, Oscar Piastri, except…