Do you want to take a screenshot, i.e. save a picture of what you see on the screen? For example, this can be smart if you need support and want to see how it looks on your screen.

In Windows 10 and 11 there are many ways to go, but one tip is to memorize keyboard shortcuts Windows

+S, which opens the most useful tool.

How to take screenshots directly

The easiest way in both Windows 11 and Windows 10 is to use the Screen Clipping Tool (also called Cut & Sketch).

. You can also use the handy shortcut Windows

+S. No matter how you do it, you will see five buttons:

Take a rectangular screen clip of the area you are drawing by holding down the mouse button and dragging down.

Does the same thing but lets you make the selection as a free form. Here, too, you draw the area you want to capture.

Take a screenshot of the window you are pointing at.
Save the entire screen image.

Close the menu without taking any screenshot. 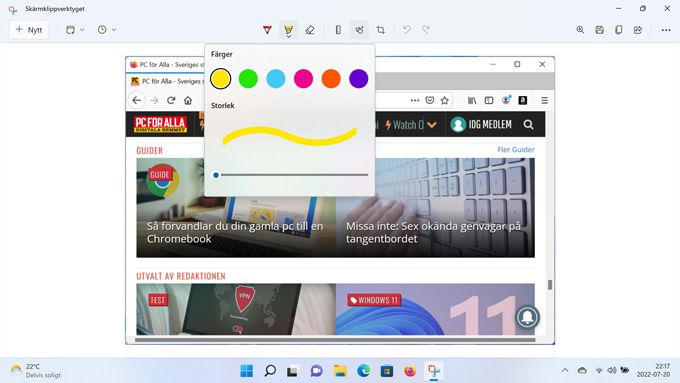 ). You can also open the image in the Screen Clipping Tool to edit it.

HOW? When you have taken a screenshot as above, you will see a notification at the bottom right. Click on it and the Screen Clipping Tool will open and you can do some simple editing. With the tools you can draw, highlight with a highlighter and erase with an eraser. You select the color and size of the tools using the respective down arrow. There is also a ruler for measuring, a tool for writing with a touch pen and a cropping tool. If you make a mistake, you can of course undo (and redo) with the last two buttons.

Whether you have edited your screenshot or not, you can save and share it.
HOW. Press the three dots at the top right of the Screen Clipping Tool and you can save, print or share the image with others via email, for example. You can also choose Open with

to edit the image in a more advanced image program.