Tons of fans would love to run into Nicki Minaj. One lucky fan recently had the chance but mistook her for another female rapper. 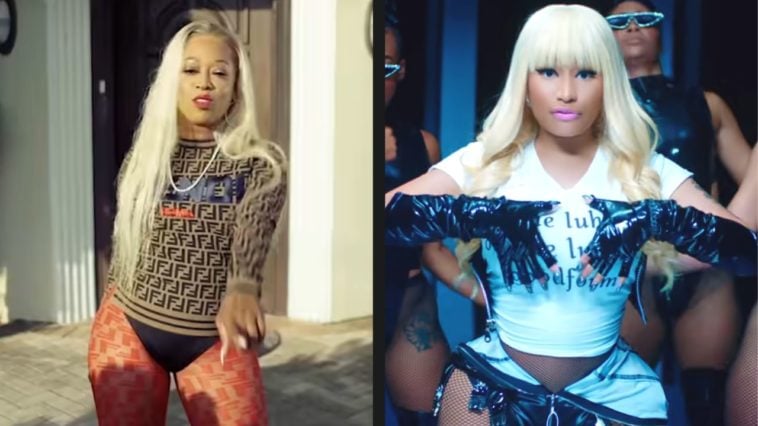 Nicki Minaj took to Tik Tok to express her recent experience at a grocery store.

The hip-hop queen was in the signature incognito look that most female celebrities don to disguise themselves while partaking in regular activities.

In her long, blonde wig with bangs and sunglasses, Nicki explained how the cashier at the grocery store recognized her but didn’t want to cause a big scene to blow her cover.

“I go into the store. I picked up a couple of things. I look exactly like this. I got up to the cash register, and the man at the register started lookin’ at me like he doesn’t want to blow my cover because other people are waiting right behind me. So lean in because he’s trying to tell me something, and I don’t want to be too loud.”

The “We Go Up” rapper continued to explain how the man at the cash register was so excited to see her, but what she said next shocked The Barbz:

“He was so serious, but he was mad excited. Like of course, I’m like a global icon superstar so I’m like it’s ok. He leaned in and with all seriousness, he was like “I’ve been listening to you all day.”

With a look of confusion, Nicki continued to tell the story of how the cashier thought she was Florida rapper Trina.

He was like “that old school shit is my favorite. So I was kind of like huh? He was like that one with you and Trick Daddy.”

This sent fans into a frenzy, with many claiming the two rappers look nothing alike.

According to reports, Charles Polevich, who killed Nicki Minaj’s father, Robert Maraj, in a reckless driving incident, has been sentenced to one year in prison after pleading guilty.

Polevich’s punishment also includes a six-month suspension from driving a car and $5,000 in fines.

Snoop Dogg To Star In Upcoming Comedy, “The Underdoggs”