The OnePlus 10T is the company’s second high-end smartphone in 2022. It is lightning fast and can charge faster than the OnePlus 10 Pro, but makes the necessary concessions for this. Time for the full review.

This is the OnePlus 10T review

When OnePlus released the 10 Pro in April, we wondered where the ‘normal’ OnePlus 10 had gone. This device was never released, but OnePlus now comes with a high-end smartphone: the 10T. The manufacturer markets the phone as a ‘super-fast flagship with ultimate performance’. The focus is therefore clearly on speed. With a suggested retail price of 699 euros, the OnePlus 10T is a lot cheaper than the 10 Pro (899 euros) and still has better hardware. Sounds like a good deal, but the company has cut back on other parts to get to that lower price. Of course, that does not necessarily mean that the OnePlus 10T disappoints. In this review we look at what the OnePlus phone has to offer, which innovations have been implemented and whether the 10T is worth it. So read on quickly or go to a specific part of the review via the table of contents below.

Would you rather watch? Check out the review above!

We start with the design. The OnePlus 10T looks largely the same as the OnePlus 10 Pro: the smartphone has a glass housing with a large camera island on the back. Because the camera island has a different color, it appears as if it ‘curves’ out the side of the housing.

The OnePlus 10T comes in two colors: Moonstone Black and Jade Green. The black version has a new, striking finish: it is a bit matte-like. And that while the green version (which even tends a bit towards gray and blue) is shiny. We have tested the green 10T and think it looks sleek, although it is a bit boring. Due to the glossy finish, the OnePlus phone is quite smooth and you can see fingerprints and grease stains well. The 10T also feels less luxurious than the 10 Pro, as the latter has a matte back. Although the phone is protected by a layer of Gorilla Glass 5, we recommend that you use a case.

It is important to know that OnePlus has removed a characteristic feature: the alert slider. With this physical button you can easily and quickly switch between sound profiles, in other words: you immediately set it to silent, vibrate or sound. We don’t think it’s a disaster that the alert slider has disappeared, but it is a shame. After all, the button gave the OnePlus phones its own face and is very popular with users. OnePlus reports that the alert slider has been omitted to make more room internally for other parts. The company (fortunately) also plans to add the slider to future phones.

The screen of the OnePlus 10T is 6.7 inches and has a resolution of 2412 by 1080 pixels. The refresh rate is 120Hz and that ensures very smooth images. The device can adjust the refresh rate to 60 or 90Hz to save battery, but in the settings you can only choose 60 or 120Hz.

Despite the screen being less impressive than that of the OnePlus 10 Pro – this display has a higher QHD resolution and ltpo technology to make the refresh rate really variable – we have little to complain about. It is simply a beautiful and large screen on which you can watch Netflix and HBO Max and play games.

Colors look very nice, everything looks sharp and the maximum brightness is also fine. The edges around the display are thin, although we do see a clear ‘chin’ at the bottom. This is not disturbing, by the way. The selfie camera is incorporated in a small hole in the screen, at the top center. The fastest hardware

As mentioned, OnePlus emphasizes speed with the 10T. The device is equipped with the Snapdragon 8 Plus Gen 1 processor and that is the fastest chip that we currently find in Android phones. The ‘entry-level model’ has 8GB of RAM and 128GB of (non-expandable) storage space. OnePlus also sells a version with no less than 16GB(!) RAM and 256GB storage, which we have tested. So impressive and the performance is excellent. The OnePlus 10T is a real powerhouse and flies through the software. Apps and games start up smoothly, always run smoothly and you can multitask with many apps at the same time. The 10T is not necessarily much more powerful than the OnePlus 10 Pro, but it is easily one of the fastest smartphones of 2022. 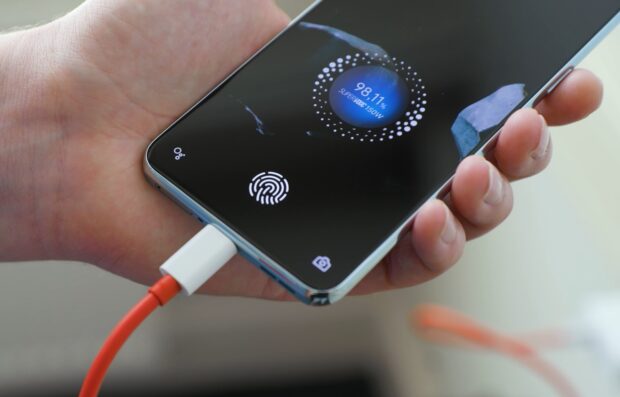 Charging is bizarrely fast What distinguishes the OnePlus 10T is the charging speed. The device features the so-called ‘150W SuperVOOC Endurance Edition’ fast charging technology ek. Quite a mouthful, but the bottom line is that topping up the 4800 mAh battery is insanely fast. With the included 150 Watt charger, you don’t even need 20 minutes to go from 0 to 100 percent. Ten minutes of charging is enough to get through the day, according to OnePlus. Of course we tested that and after ten minutes on the power we had 63 percent battery again. In practice, that is indeed enough to get through the day, provided you do not use the 10T very intensively.

These are the 3 best tablets for students under 400 euros

Google Calendar will probably be slimmed down by one more function