In the aptly titled “Waterworks,” we get a glimpse of Kim Wexler’s (Rhea Seehorn) life in the post-“Breaking Bad” timeline (she’s in Florida), as well as her final moments with Jimmy in the “Better Call Saul” narrative as they finalize their divorce. After Jimmy callously dismisses Kim to cover his own hurt after signing divorce papers, she goes outside in the pouring rain to have a cigarette. It’s a nice callback to how fans saw Kim and Jimmy bond back in Season 1.

“Ayo, can I bum one of those?” a voice asks. It’s Jesse Pinkman, loitering outside of Saul’s office and decked out in his trademark beanie and colorful hoodie. 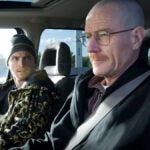 “What’s up with this s—?” he asks in reference to the downpour. “Aren’t we supposed to be in the middle of the desert?” Paul, now 13 years older than when this scene is meant to take place in “Breaking Bad,” still maintains that youthful foolishness that charmed audiences the first time around. Despite his forays into crime, there was always an innocence to him.

Jesse recognizes Kim from when she got his friend Combo out of a legal pinch “scot free.” He’s now accompanying Emilio (John Joyama) — who we first met in the “Breaking Bad” pilot and haven’t seen again since the show’s second episode until tonight — to Saul’s office. Again, co-creators Vince Gilligan and Peter Gould love to play with the subtle connective tissue between both series.

Jesse is hoping Emilio can avoid jail time and asks Kim if Saul is any good. “When I knew him, he was,” Kim says, answering a different question entirely and leaving Jesse to ponder what she meant. It’s a wan referendum on Jimmy’s downward spiral from a well-intentioned huckster who was ultimately good to the slimy criminal lawyer we always knew.

Hopefully, this isn’t the last we’ve seen of Kim Wexler, the beating heart and breakout character of “Better Call Saul.” But if it is, perhaps it’s fitting that her final moment is shared with Jesse, the emotional center of “Breaking Bad.” 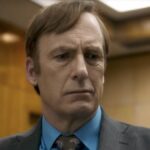