Last week, Saweetie sat with Kevin Hart on his show, “Hart to Heart” and opened up about her struggles from being in the public eye while coping with her mental health. The Bay area native also broke her silence about the reason behind her big chop. 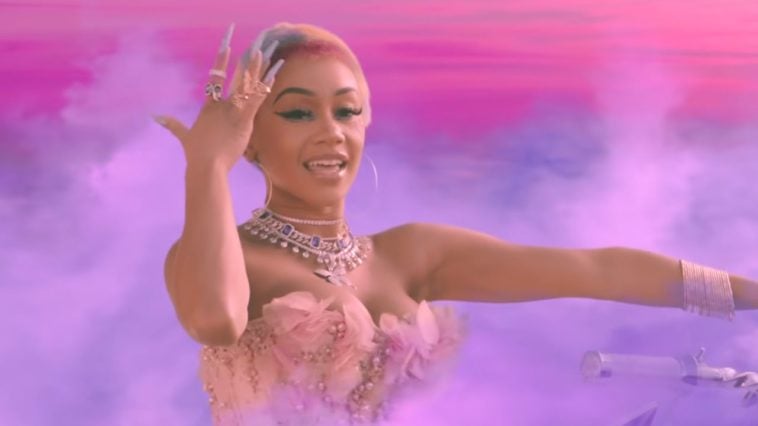 The Icy Princess dropped some gems during an interview with Kevin Hart on “Hart to Heart,” where she shares how she managed through the distress of fame.

The “Tap In” rapper said, “The world of the internet, celebrity, paparazzi. People invading your intimate space…I wasn’t ready for that.”

In addition, the Icy girl admitted to going through “tons of mental breakdowns” throughout her career.

When asked about her reason for going for the big chop, she told Kevin:

“In quarantine, I had time to do a lot of like self reflection. I learned how to meditate and through meditation, I’ve had access to my higher self. That gave me a whole new experience. And when I did that, I wanted to start fresh. And I did my research and I heard that hair holds a lot of energy so it’s essentially the metamorphosis of Saweetie and Diamonte of a caterpillar into a butterfly.”

Saweetie added that she also learned how to cope through meditation and balancing her energy.

Recently, fellow female artist Doja Cat also went for the big chop and even went as far as shaving off her eyebrows.

Concerned fans have been taking to social media to speak out.

One Twitter user said, “What is wrong wit Doja Cat?”

Another fan on Twitter said, “Is @DojaCat sick? Serious question. .”

Perhaps, Omeretta can take a few pages from Saweetie’s book.

Omeretta The Great, the newest signee to hit-making record mogul, Diddy “Love”, has told fans about her ongoing battle with mental health issues.

The pressure to work and make money has Omeretta “numb.”